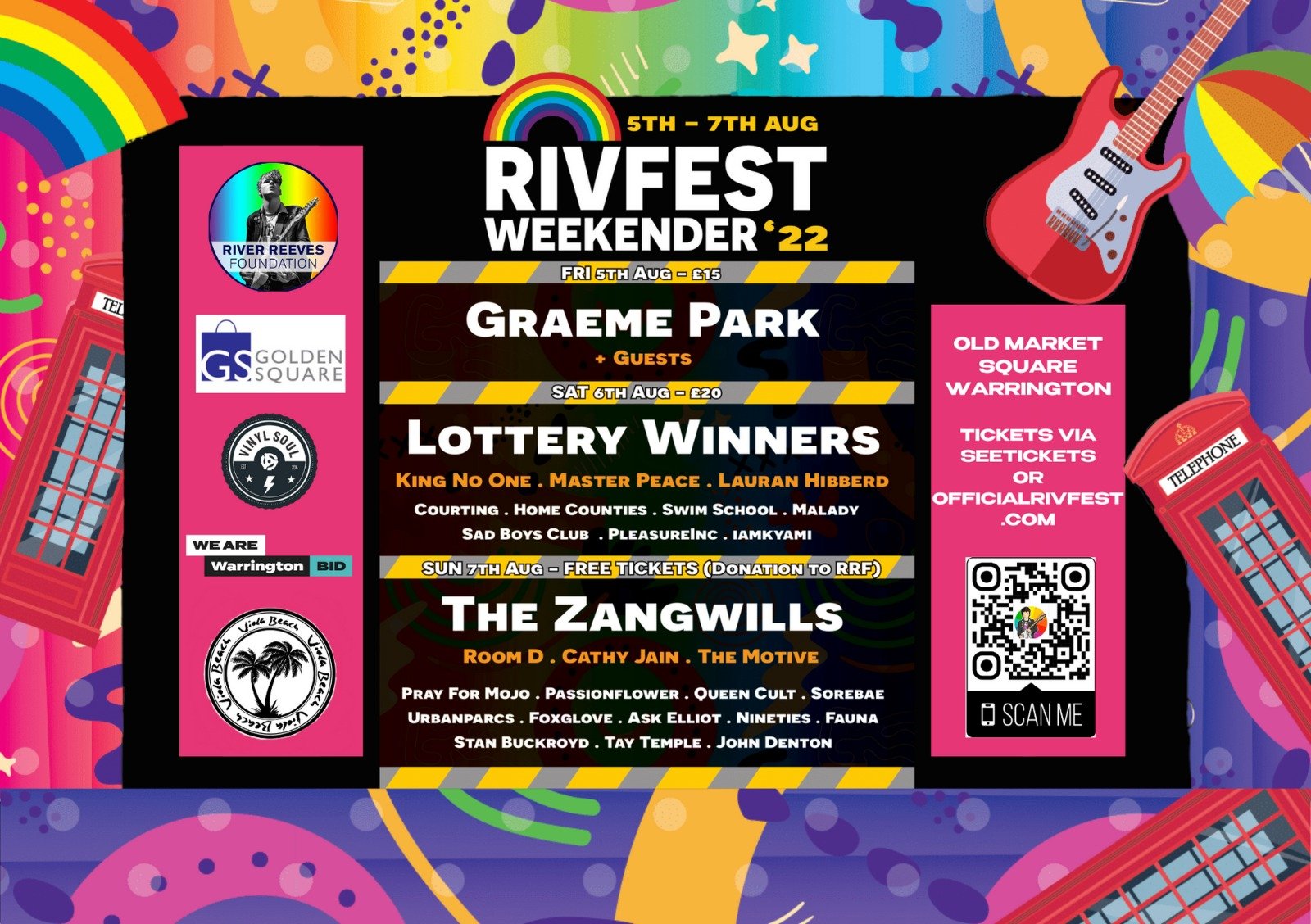 Now firmly established as one of the key fixtures in the region, the charity festival returns to the 2,500 capacity Old Market Square, Warrington with a three-day weekender of major names and hotly tipped talent. Get your tickets here.

RivFest is presented by The River Reeves Foundation, an arts charity launched in 2016 following the tragic deaths of River, his band Viola Beach and their manager, Craig Tarry.

The Friday night sees the return of Hacienda legend Graeme Park, following his unforgettable appearance at the festival last year. This ultimate launch party will feature an exclusive set of tunes handpicked from his 30 year DJ career. He’ll be joined by a couple of guest DJs for the evening for what will kick off a mighty weekend of music.

Saturday 6th brings a whole host of talent from across the country to the square, topped off by one of the most exciting live acts in the North West right now in Lottery Winners. The Leigh based indie pop act have rapidly grown their fanbase after supporting the likes of Sleeper, Shed Seven, and even Tom Jones, making a firm impression on thousands of new listeners. Expect to hear plenty of summery tunes from their second album ‘Something To Leave The House For’ and many other upbeat tracks in what will be the band’s second appearance at RivFest.

Also joining Lottery Winners through the evening are York rock trio King No-One, infectiously catchy indie pop singer Master Peace, and attitude-laden slacker pop star Lauran Hibberd. With each of these acts racking up endless fans across the globe in recent months, you won’t want to miss your chance to see them in Warrington.

As well as hosting these established names, RivFest are platforming a daytime bill of names signed to some of the UK’s favourite tastemaker independent labels such as Nice Swan, Alcopop and So Young Records. Post-punk outfits Courting and Home Counties will join dreamy Edinburgh act swim school and innovative electro-indie act Malady. Fans of Arcade Fire and The Cure will adore Sad Boys Club, and you’ll not want to miss rising Norwich act PleasureInc and Heist Or Hit Records’ iamkyami who open Saturday’s line-up.

It wouldn’t be RivFest without a celebration of local talent, with a huge line-up of acts handpicked from Warrington’s music scene and across the North West for Sunday’s free entry finale. This year, RivFest regulars The Zangwills have graduated to headline spot, after a whirlwind year of national tour dates and an award winning music video directed by Game Of Thrones’ Maisie Williams. The indie rock group have played RivFest several times across the years, so they were the natural choice to headline 2022’s closing day.

The River Reeves Foundation is all about creating new opportunities for rising musicians, and this year they ran a competition with Neighbourhood Weekender for one act on the bill to open the main stage at NBHD. Foxglove were the lucky act to be selected, and if you missed them at the May festival – or just want to see them again! – you can do so at RivFest this August. Singer-songwriters Stan Buckroyd, Tay Temple, and John Denton open up the Sunday proceedings, where there is music to suit just about everyone’s tastes. The festival also ensures that live music is accessible to all, with Sunday’s line up free to watch, and donations to the charity encouraged.

All ticket sales from RivFest Weekender will go towards the River Reeves Foundation, who award bursaries to young creatives across the North West. The charity has also recently launched a Young Artists programme at RNCM, and this project will also be supported by Riv’s Riders, who will be cycling 300km around Mont Blanc this July.

Previous acts to perform at RivFest have included Everything Everything, Billy Bragg, Fickle Friends, The K’s and Maximo Park.

Tickets are on sale now via SeeTickets. Tickets are priced at £15 Friday / £20 Saturday / Free with a donation Sunday